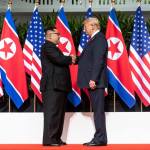 Donald Trump made history this week, becoming the first US president to meet with a North Korean head of state.

In so doing, he threw out decades of protocol for dealing with one of America’s most notorious, unpredictable adversaries.

He skipped almost all the usual preparation that precedes a high-stakes meeting between two heads of state.

And it’s not clear yet what this meeting will achieve in the long run, with a joint statement noticeably light on details, especially when it comes to the terms of North Korea’s pledge to denuclearize.

Whatever you think of Kim Jong-un and his motives—whether it’s peace or prestige he’s after, or maybe a little bit of both…

Whatever you think of the incendiary rhetoric that preceded this moment—whether it was a catalyst for it or an unnecessary provocation making it harder to negotiate peace, or maybe a little bit of both…

Whatever you think of either man, their policies, their posture—remember this:

Sitting down and talking with our enemies is better than the alternative.

When you sit down with someone, when you break bread with them, some kind of bond or covenant is forged between you, even if it’s only the smallest, most rudimentary connection. It does not erase the differences or points of contention, but it might shorten the distance between you, even if just a little.

And “just a little” might be all you need to take the next small step toward peace. And the next one. And one after that.

To be sure, not every situation is the same. This was a meeting between two nuclear-armed heads of state, one of them leader of the most powerful military on earth.

Not every conflict can be resolved by sitting down and talking with our enemies—but maybe more of them than we think.

And it makes me wonder: if we can sit down and talk with North Korea, what if we sat down and talked with Iran too, without all the preconditions or saber-rattling? What else could we achieve that might surprise us?

We’ll never know unless we try.