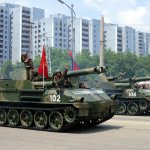 I’m standing close to the North Korean border right now, dreaming about peace with friends from across the region—South Korea, North Korea, Japan—while the rest of the world talks of war.

I was asked to come to the Korean Peninsula because of our decade of experience unmaking violence in the Middle East. I came in search of a better way forward. But mostly, I’m here to listen—to learn what people here can see that the rest of us miss, to hear the voices being drowned out by the drums of war.

There has been so much talk lately about North Korea in our corridors of power, including this week’s State of the Union. But the conversation taking place here, much closer to the frontlines, is drastically different.

And we desperately need to listen. Here is some of what they are saying right now…

A significant number of people here are gravely concerned at America’s escalating rhetoric, painting North Korea as an imminent, existential threat. Some see it as a pretext for war; many others are convinced that it’s meant to justify an ongoing military buildup in the region. Either way, a great many people perceive the U.S. to be a greater threat right now than North Korea itself.

There are people on both sides of the DMZ who insist that our continued talk of bombs and fire and fury will not bring the peace we need.

That rings true to me, after a decade of living and serving in the Middle East. If I have learned one thing, it’s that bombs might kill the enemy, they might help overthrow rogue regimes, but they cannot bring peace.

North Korea will never give up its weapons.

Many people here perceive us to be on a footing that makes war all but inevitable. North Korea, they tell us, will never give up its weapons. And if you look at recent history, it’s not hard to understand why.

One of the reasons I was invited to come is because there are so many parallels between what’s happening here and what we’ve seen in places like Iraq and Libya. In both countries, we saw tyrannical dictators who, under threat, gave up their weapons of mass destruction, dismantling their arsenals—after which the American military overthrew them anyway.

Kim Jong-un is not stupid. He knows what happened in Libya and Iraq. He knows the what will happen to his regime if they dismantle their nuclear arsenal. His ability to kill millions at the push of a button is his only means of survival—and survival is what he cares about most.

It’s not all that different from what Donald Trump said in his State of the Union address: “Unmatched power is the surest means of our defense.”

People are scared, but it’s not North Korea they fear most.

By all accounts I’ve heard here, people in the north listen to our rhetoric—our talk of fire and fury—and they are terrified that we will launch a preemptive nuclear war against them.

The people, not just the government.

And they’re not just getting it from propaganda disseminated by their leaders, but from our own words. From our own government.

They are terrified that we are going to wipe them off the map.

I don’t want to live in a world where we dehumanize our enemies—by portraying them as unhinged psychopaths or monsters. Because when we do, we make easier to rationalize wiping them off the map. This kind of dehumanizing rhetoric even makes it possible to contemplate the unthinkable: a preemptive nuclear strike.

I don’t want to live in that world.

I want to live in a world where we give ourselves sacrificially. Where we demand our leaders sit down and talk to each other. Where we refuse to build our country on the backs of others. Where we don’t pursue prosperity for ourselves while others starve. Where we don’t just keep building our already unmatched military might, while people cower in fear that we are going to blast them off the face of the earth.

I want to live in a world where we give ourselves away in preemptive love, in self-sacrifice.

That’s why I’m here on the North Korean border. To listen, to learn, to encourage. And to say, along with my sisters and brothers here, that we don’t want more war.

And if, God forbid, it happens, then we cannot sit on the sidelines. Our only loving option at that point will be to rush to the frontlines and give ourselves away amid the fire and fury, on behalf of those who are suffering.