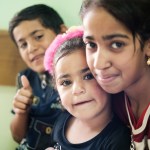 It was a long car ride from the small city where Dr. Mustafa practices, to where we were headed. The roads are still cracked and pitted from ISIS’s strategic destruction; every few minutes, we were jolted violently as the driver braked and trundled over a strip of blasted asphalt.

Dr. Mustafa lounged comfortably in the passenger seat. He drives daily from the city where he lives to the clinic a couple of hours north, after a 6-hour shift at his “real job” in the hospital. Bumpy roads are nothing new to him.

“You know why the road is like this right?” he asked conversationally. “ISIS did it to slow the Iraqi and American military down.”

That such a dire fact was delivered in the same tone he’d just used to discuss the latest episodes of Game of Thrones—he is a big fan—was somewhat disorienting.

Dr. Mustafa has lived in the grip of war, and the devastation of its aftermath, for all of his three decades on earth, so the practiced flip in conversation between conflict and anything else was a fact of his life. To those of us fortunate enough to have never encountered armed conflict in any guise, it’s something that takes a bit of getting used to.

You first met Dr. Mustafa in 2018, a displaced doctor, serving displaced families. His family is originally from Mosul, displaced by violence before the war with ISIS even started. His grandmother still lives there, and he was riding with us so he could visit her for the first time in 5 years. He knows first hand what life in exile feels like, and what it does to families.

Related: These Refugee Doctors Are ‘Wasting’ Their Lives

Today, Dr. Mustafa is a qualified physician. He has more opportunities than others who don’t have his level of education. He doesn’t have to work a second job when his first is hard enough, but he chooses to.

The oil refinery that was the linchpin of the entire area’s economy was destroyed by ISIS. ISIS also decimated its infrastructure and community. Residents who remain or have returned have little by way of services, opportunity, or a hopeful way forward. It is not a town where a young doctor wanting to advance his career would look for opportunity. The material rewards are few: the compensation is modest, resources are extremely limited, and the work is hard—often heartbreaking.

“People give me hope. You cannot get hope from things that do not have a soul.”

But for Dr. Mustafa, being a doctor isn’t about big bucks or material luxury. It’s about life. This clinic is a lifeline for the people in this town in central Iraq.

And this value is the thing that drives him to serve the people who need it. Whether it was in the Dream City tent-clinic he and the other doctors built with their own hands (2017), or the clinic he is serving in now, healing people who need it the most is what he has dedicated his life to.

His patients are often furthest from being able to reach and/or afford primary healthcare: those who have lost everything in the war, those who are displaced, those who have returned with little. You’ve helped keep those clinics operational so doctors like Dr. Mustafa have the resources to provide devastated families with the health care they urgently need.

Related: Without Functioning Hospitals, our Clinics Care for Displaced Families

It is why Dr. Mustafa goes above and beyond his duty every single day. And you make it possible for him to do so.

Because in healing, is hope.

“People give me hope,” he says. “You cannot get hope from things that do not have a soul.”

Healthcare is a fundamental element of restoring peace in embattled communities all around Iraq. With health comes ability, and the means to look for opportunity, to work and flourish. The doctors that you support in this clinic are doing vital, lifesaving work every single day… and building peace in the way that only they can.

When you donate to support doctors like Dr. Mustafa, you are helping to heal more than bodies. You are helping heal deep rifts in communities that have been devastated by war. You are healing hearts, and delivering hope.

Heal the war-ravaged communities in Iraq. Give today.