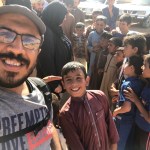 Ihsan came of age during the Iraq War.

He was 16 when American troops invaded his country in 2003. He lived in a mostly Shia city in southern Iraq. Shortly before the war began, Ihsan’s father risked his life to buy a satellite receiver for his family, their only link to the outside world.

“It was a huge crime if the government found out,” Ihsan tells me. Saddam kept a tight leash on the flow of information in Iraq. “He wasn’t telling us anything about [the war]. Always celebrating and showing his power and telling the people that we are victorious.”

“My father felt we needed to see something from the outside, to see what was going on.”

One Friday in March 2003, Ihsan sat with his father and watched American bombs rain down on Baghdad. “It was the first time I saw the bombing of an actual city that I know, that I’ve visited.”

“We all thought Saddam’s family would stay in power,” he says, “his sons and grandsons and whoever came after him. I mean, it was 30 years of power for Saddam.”

It seemed impossible to imagine Iraq without Saddam or his cruelty. “My city was one of those that took a big hit during the years of his tyranny,” Ihsan explains. “Many people were kidnapped, taken, killed. Lots of genocides were discovered afterward.”

After weeks of watching the invasion on TV, with the help of his father’s contraband receiver, the images of war stepped off the screen and into real life. But Ihsan’s hometown was not like Basra or Nasiriyah, both of which saw fierce combat in the early days of the invasion.

“After weeks of fighting in Basra, US troops arrived in my city—but there was no fighting,” Ihsan says.

Most of Ihsan’s neighbors were delighted to see Saddam toppled. They weren’t nearly as concerned with who did the toppling, ”whether an enemy or someone from our side.”

The morning after US troops arrived, Ihsan met an American soldier for the first time. “I don’t remember his name, but I think he told me he’s from California. My English wasn’t that good yet, but I managed to have a conversation with him.”

Life without Saddam, once impossible to imagine, now seemed full of possibility.

“This is freedom,” Ihsan thought at the time. “We are now free from Saddam. We can do whatever we want. We can establish a new and prosperous country for ourselves.”

Rumors spread that President George W. Bush had promised Iraqi citizenship would be the envy of the world, that everyone would soon be jealous of Iraq’s postwar prosperity.

“Maybe Bush never said that,” Ihsan admits. “But it spread like fire.”

Not everyone in Iraq felt the same way about US troops. But the hope Ihsan and his neighbors felt in the first weeks after the invasion—it was electric. “We felt happy, like a new world was waiting for us.”

“But then,” he pauses, “you know all that happened.”

The U.S. gravely underestimated the challenge of building a post-Saddam Iraq. Sectarian violence exploded, fueled largely by Saddam loyalists and former members of his outlawed Ba’ath Party. One form of corrupt, sectarian rule gave way to another. The country descended into a brutal insurgency that claimed thousands of lives and eventually gave rise to ISIS.

The promise of a prosperous, peaceful Iraq never came to be. The pain of that broken promise is palpable, the consequences playing out to this day.

“It wasn’t like what we heard,” Ihsan says. “It wasn’t what we’d been told. Nothing like that. Instead, it was war after war after war. They just keep coming. From al Qaeda, to the sectarian war, to another militia’s war, to the war with [ISIS], to… yeah, we don’t know what will come in the future.”

“Some of us feel angry,” he says. “Many of us blame the United States administration for what is happening in Iraq.”

He describes what it feels like to be a pawn in someone else’s game of geopolitical chess. “They feel—everyone here, maybe—that the US, Iran, Turkey, the Gulf countries, whoever… every country has their agenda for Iraq now. [It’s easier] to export their problems to Iraq and fight their wars inside. They are fighting those agendas inside Iraq.”

“They found that the [Iraqi] people are good fuel for it.”

Ihsan is a friend. We’ve worked together for more than two years now. We’ve visited towns that were all but destroyed in the war with ISIS. We’ve laughed at prank YouTube videos together. Ihsan regularly puts his life at risk to serve those caught in the aftermath of war.

I want to know what he thinks about what’s happened to his country since it was invaded by mine.

It turns out that’s a more complicated question to answer. “I’m not sure, actually. What should I feel? Should I be angry for what’s happened?”

He pauses again. Ihsan has seen more than enough to know that a simple narrative is almost never the whole story—whether it’s one painting the US as a pure and noble liberator, or as a merciless, brutal occupier. On the one hand, he believes America should have done more to “bring the right people in the right place,” instead of what we ended up doing: replacing one form of corrupt, sectarian rule with another.

“This is what you have when one powerful nation comes and invades another nation,” he says.

But Ihsan refuses to blame everything on the US. “At some point, it’s our mistakes that have brought the country to this state,” he says, alluding to the insurgency that followed Saddam’s ouster. “We didn’t choose wisely. We went with those who deceived us and gave us false promises and manipulated everything we believe in, [those who] tried to use religion to control people.”

In the end, he offers no simple answers. “It’s like, who should we blame? There is, I mean, many parts involved in this problem in Iraq and what’s led to now.”

Not everyone sees it the way Ihsan does. There is no one official “Iraqi” view of the war, any more than there’s one official “American” view. But Ihsan’s ability to see nuance, to see shades of gray where many of us see only black and white, teaches me something else:

And the simple narrative is almost never true.

Ihsan doesn’t just choose to see past the simple narrative. He is defying this narrative, one that would write off his country as hopelessly sectarian, as a lost cause. He is choosing to write another story with his life.

A member of Iraq’s Shia majority choosing to live in a part of the country where he is a minority.

A devout Muslim showing up to welcome Christians back to their ancestral homelands after ISIS because, as he puts it, “This is what Iraq should be.” Muslim and Christian. Arab and Kurd and Chaldean and Yazidi and everyone else.

He works side by side with Americans, Canadians, and Iraqis from all backgrounds to unmake violence, to create another future for Iraq.

After 15-plus years of war and devastation, much of it of my own country’s making, this is what gives me hope for Iraq. Hope that it can rise up out of conflict and international manipulation. Hope that people can see more than just ethnic divides and endless brutality. Hope that allows us to see the Iraq Ihsan sees, that calls it into being.