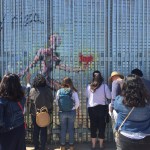 What is justice? Is it simply giving what someone deserves?

And who determines what someone deserves? Is it the world powers? Is it those considered privileged?

And what is mercy? Is mercy only for the innocent? Is it only for those who are remorseful? Do I get to define who is worthy of mercy, based on my fear or what I understand of a situation?

Someone once told me that, “Your words and your actions—or the lack thereof—impact humanity.”

So far in my life I’ve put a lot of emphasis on the first part—my words and actions. But I tend to forget about the “lack thereof,” or the things I have chosen not to do—and how that plays a part in ending war.

This Thursday, June 6th, is the 80th anniversary of the MS St. Louis being forced to turn back. In 1939, over 900 Europeans, primarily German Jews, set sail for Cuba on the St. Louis, looking to escape the Nazis. Cuba took a handful of refugees, but refused to take the rest. So a plea was made to President Roosevelt and Canada to accept those still on board.

This was right after the Great Depression. Stories circulated that the Jews were going to come and take all the jobs in the US—so the US denied the ship and sent it back to Europe. Canada did as well.

A few European countries absorbed some of the refugees, but over 500 refugees were sent back to their respective homes.

Almost half of them died in concentration camps.

Helping asylum seekers in El Paso, Texas, could be something we easily don’t do. It could fall into the “lack thereof.”

After all, bombs aren’t falling in Central America. Families there aren’t running from the threat of ISIS.

But they’re running from the threat of violence—and it’s some of the worst violence anywhere in the world that isn’t in an active state of war.

Just like 1939, there’s a narrative of fear about letting them in. But I don’t want to use my privilege to be the person who draws the line deciding who receives mercy and who doesn’t.

Since our words and actions—or the lack thereof—impact humanity, what is it to love anyway in this situation?

Because they are human.

We’re asking you to show up in one of two ways:

We can be the people who love anyway for our friends on the US-Mexico border. Join us.