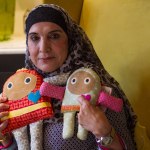 This is a difficult, confusing time for those who dream of peace between Israel and Palestine. In the eyes of many, Wednesday’s announcement was a setback to the latest efforts to revive the long-stalled peace process. Some believe it is a “death knell” to these efforts.

While politicians of every stripe make their statements, while they continue to talk about peace in the abstract—often while doing little to create it—a handful of Israeli and Palestinian women are forging another way, together.

This is their story. We hadn’t planned to share it today. But in light of current events, we need their story as a reminder that peace IS possible, no matter the obstacles.

Sahar chooses brightly colored fabric from the stack nearby, spreads the cloth on her work table and smooths it flat with her hands. One template at a time she traces out arms, legs, torsos, and heads. Mere scraps now, these pieces will be stitched together to make sweet dolls.

Of all the things Sahar makes, these dolls are by far her favorite.

When she’s tracing out patterns onto the fabric, Sahar can forget about her busy days caring for others. She’s up and working by 6:00 am, cleaning and cooking for her family. Two days a week she takes her mother-in-law to the hospital and sits with her for long hours as she receives dialysis treatment. Then there is her part-time job monitoring exams and keeping an eye out for cheating at the local high school. Sahar tells me that many students cheat. She catches them retrieving smuggled cell phones from their socks.

“I’m not their favorite,” she says with a laugh.

When she’s stitching small bits of fabric together, Sahar can forget about the stress of being a West Bank-born Palestinian living in Israel. She has lived in her husband’s city—a city with a mixed Jewish and Arab population—for 20 years. But Sahar still doesn’t feel at home.

Like many Palestinians, she doesn’t have status as a citizen or even a permanent resident. Every year, she must apply for a residency permit, which can be revoked or denied at any time.

Carrying a permit doesn’t even provide a guarantee of normalcy—sometimes even the guards at the local shopping mall won’t let her enter, simply because she’s Palestinian.

As Sahar adds stuffing to each doll body a little at a time, transforming flat bit of cloth into a three-dimensional doll with life, she reflects on the ways this project has changed her life. A chance meeting with the founder of a women’s center led Sahar, an Arabic speaker, to sign up for classes in Hebrew and small business management. She, a Muslim Arab, came together with Jewish women in a safe space and found community together. Her success in class, added to her talents in sewing, made her a perfect fit for the doll project they created together.

With these dolls, Sahar finally has a chance to do something for herself. She has an outlet for her creativity, a reason to get out of the house and meet with colleagues. She has income of her own. These dolls give Sarah agency—and the ability to create life-giving days in circumstances that are often demoralizing.

The doll project flourished for a while, and then it waned. Sahar doesn’t have the orders to fill like she did a couple years ago, when she would be up sewing past 10:00 pm every night.

Together we are putting Sahar and her colleagues back to work. We are celebrating the community forged between Jewish and Arab Israelis. We are restoring what Sahar loves most about making dolls—the ability to create life-giving days.

Imagine if dolls could be more than mere child’s play. Imagine if they could be agents of peace in one of the most polarizing conflicts on the planet.

Due to overwhelming response, Peace Dolls are temporarily sold out. But we have more on the way!

Sign up below to be notified right away when more Peace Dolls arrive.